The Death of Doorknocking 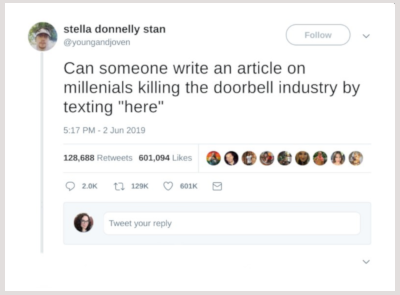 We already know that Millennials don’t watch cable TV and don’t talk on the phone. Now we can add another item to the list of things they don’t do: Answer doorbells. At least that’s what millenials are saying on Twitter.

It isn’t just millennials who aren’t answering doorbells anymore. As the external communications manager for SEIU Local 2015, I saw first hand how field organizers were increasingly challenged to get people to open the door. Along with phone banking, door-to-door organizing has become increasingly more labor intensive and more expensive with dwindling returns.

Face-to-face contact is still demonstrably the most effective way to turn out supporters. But with people increasingly willing to ignore the doorbell, it’s important to use communications technology to improve the odds of making contact.

We decided to test the Relay peer-to-peer messaging application in addition to phone banking and door knocking for turnout. The power of peer-to-peer messaging is that it allows organizers to directly engage workers and have persuasive conversations with them in real time. For this test, we used Relay to reach workers whom we had failed to reach by phone or at the door.

The results were remarkable: engagement rates were as high as 30% in California’s Central Valley and other regions. We were able to turn out an unprecedented number of non-members to the union action and also add them to our lists for long-term cultivation.

Based on the results of this test, I believe that peer-to-peer messaging should be an integral part of any field organizing campaign. Uses can include contacting targets in advance to increase the odds of meeting people face-to-face, as well as engaging supporters who can’t be reached through other channels.