Why It’s Impossible to Target Latinos 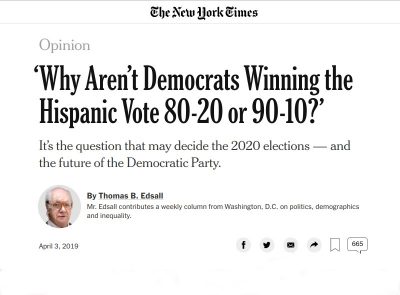 Latinos are incredibly diverse and you can’t rely on one message to reach all of them.

I’ve been seeing a lot of stories conjecturing how Latinos will vote in the 2020 elections and the best way to target and influence them. But these conversations always drive me a little crazy because they are reductive and misleading.

The mistake everyone makes is treating Latinos as monolithic when different Latino groups have as much in common as people from the UK, Australia, South Africa, and the US have with each other. Yes, they have a shared language and some shared culture, but they are also profoundly different in many ways.

I even see Latino individuals and advocacy groups making the same mistake, as if there is a universal message that will resonate with all the incredibly diverse cultures that make up the Latino community in the United States.

Here’s a brief overview of some of the origin groups who make up Latinos in the US and how their cultural backgrounds and immigration history should inform how you message to them:

Mexicans are the largest origin group and make up 62% of Latinos. It’s widely perceived that Mexican Americans are primarily Spanish speakers and non-citizens but 79% are US citizens and 71% are English proficient. California and Texas have the highest concentrations of Mexican Americans in the US.

Immigration into the US from Mexico has plummeted because of a declining birth rate and in 2015, the Pew Research Center reported that more Mexicans were leaving the U.S. than arriving.

While 20% of Mexican Americans live in poverty, there are significant numbers of middle-class Mexicans as well—50% of the population are homeowners.

The majority (59%) of Mexicans identify with or lean toward the Democratic Party while about three-in-ten (27%) Mexican registered voters affiliate with the Republican Party.

Organizations targeting Mexican Americans need to avoid presuming that their audience is primarily Spanish speaking or that immigration is universally a front burner issue.

Puerto Ricans hold a unique position in the Latino community: Puerto Rico is a US commonwealth and its residents are citizens from birth. As a result, there is a continuous back and forth migration between the island and the mainland US which ebbs and flows based on the economy and natural disasters (more on that below).

Because Puerto Ricans are US citizens from birth and because there are large numbers of undocumented immigrants to the island from the Dominican Republic, there are significant numbers of Puerto Ricans who support a crackdown on illegal immigration.

Puerto Ricans are not politically homogeneous. 60% identify as Democrats while 40% identify themselves as Republicans (and three-fourths of those say they are conservative or very conservative).

There’s been a recent surge in Puerto Rican migration to Central Florida as a result of the Puerto Rican debt crisis and the devastation of Hurricane Maria in 2017. Orange and Osceola counties recorded a 12.% increase in the Puerto Rican population.

Trump’s mishandling of the Hurricane Maria response is a galvanizing issue in the community. Because Puerto Ricans are much more likely to vote Democrat than other Florida Latino populations (Cuban and Venezuelan), there has been speculation that Puerto Ricans can tip the state blue in the 2020 elections. However, voter turnout among Puerto Ricans lags behind Cubans so campaign messaging needs to focus on voter registration and early voting.

Cuban-Americans famously immigrated to South Florida in large numbers starting in the 1950s after the Cuban Revolution led by Fidel Castro. The first wave of immigrants were political refugees and many were middle class or wealthy and educated. As a result, the Cuban American community was able to quickly establish itself as a financial and political force in Florida and presidential politics.

The Cuban American community is known for being staunchly Republican and anti-socialist—but this is starting to change among the younger generation of American-born Cubans. Overall voter registration is 54% Republican, 19% Democratic and 26% no party affiliation/independent.

But there are significant differences among various demographic groups that make up the Cuban-American community. Cubans Americans who are  18 to 39 years old are 35% Republican, 23% Democratic and 40% no party affiliation. In the 2018 Florida gubernatorial race, Cuban-Americans born in the US voted 51% for Republican Ron DeSantis and 48% for Democrat Andrew Gillum.

This demographic shift presents opportunities for Democrats in previously red districts. Campaign messaging needs to focus on issues of importance to younger voters such as jobs, education and health care.

As Mexican immigration declines, there have been increasing arrivals at the U.S.-Mexico border of migrants and asylum seekers from Central America, especially the Northern Triangle countries of El Salvador, Guatemala, and Honduras. In the US, 26% of Central American immigrants live in California, 12% in Texas, and 11% in Florida.

The way that the immigration crisis is covered in the US media tends to treat Mexicans and Central Americans as a monolithic group without recognizing the history between the nations in the region and how that history creates biases between the communities in the US. Established immigrants in the US may resent undocumented immigrants from Central America and support a crackdown. This illustrates that the Trump crackdown on immigration doesn’t affect all Latino groups equally and is not perceived in the same way among all Latinos. Messaging to these communities needs to be rooted in an understanding of these nuances.