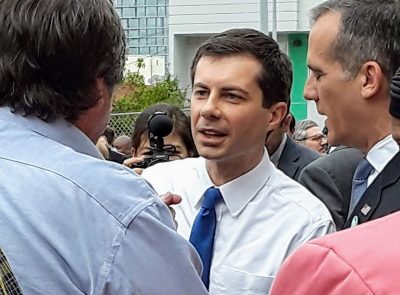 This New York Times article on Pete Buttigieg is super interesting and nails down why I think his candidacy has caught fire against the odds. This quote in particular should be tattooed on the arm of everyone who works on political messaging:

“The story that we tell, not just about government but about ourselves, and the story we tell people about themselves and how they fit in, really grounds our politics.”

That’s straight from Marshall Ganz‘s theory of Public Narrative. Ganz, a lecturer at the Kennedy School of Government at Harvard University as well as a longtime union organizer and political activist, was Obama’s speechwriter during his 2008 campaign and helped create his signature oratory style.

According to Ganz, effective public narratives can be broken down into three parts:

The Story of Self: A personal biography that explains how the individual reached the point of taking action on an issue.

The Story of Us: A collective story that illustrates the “shared purposes, goals, vision” of a community or organization.

The Story of Now: The urgent problem that we (the speaker and the audience) have come together to solve.

If you watch Obama’s speeches you’ll see that he hits all three of those points every single time. He opens by describing his childhood as a black child in a multiracial family. He then pivots to explaining why his personal journey was only possible because of the values we all share as citizens of the US. Then he concludes with a call to action on an issue that we can only solve together. It’s a formula—but an extremely effective formula.

I’m convinced that a big reason for Buttigieg’s meteoric rise in the polls is because he is masterful at wielding public narrative. He takes his personal story—war veteran who is also a married gay man and mayor of a midwestern city—and explicitly connects it to our shared values and offers the possibility of common ground.

Another political superstar who is expert at public narrative is Alexandria Ocasio-Cortez. She uses social media tools such as Instagram to consistently hammer home her credentials as a Latina from the Bronx who has held working class jobs and speaks in an authentic voice about our collective responsibility to support working people.

Interestingly, Ganz wrote a column during the 2016 presidential campaign that criticized Hillary Clinton for not using storytelling effectively.

“Despite many years in the public eye, Clinton’s “story of self” remains opaque. How—and why—does a 1964 “Goldwater girl” become a Wellesley College activist who studies community organizer Saul Alinsky, a Yale Law School graduate who serves as a Children’s Defense Fund attorney, a first lady of Arkansas, a first lady of the United States, a failed campaigner for healthcare reform, a person exposed to painful public humiliation, a senator from New York, a supporter of NAFTA and the Iraq war, a failed presidential candidate, a secretary of state, a public speaker who takes $200,000 from Wall Street banks for a speech, and the first woman to win nomination for the presidency by a major party?

Her résumé tells us that she is competent, a hard worker, and a survivor. But what of her authenticity, courage, and strength—not only on her own behalf, but on behalf of others, or even on behalf of her values? Opacity about her story undermines the value of her obvious capacity to survive, thrive, and operate in a complex political environment. She becomes an acceptable but not inspiring candidate.”

Unfortunately, Hillary wasn’t unique in where and how she fell short in creating a compelling personal narrative for her campaign. In my experience, many progressive candidates believe that public narratives are frivolous and undignified. They think that the work alone should speak for itself. They focus on policy details without talking about values. While in some ways that focus is admirable, it doesn’t jibe with how real people choose to vote or take action.

Public narrative is a framework that can be used across multiple communication platforms and different campaigns. Whether you are working for an individual candidate or on an issue, whether you are drafting press releases, writing speeches, crafting social media posts, or writing SMS messages and email, the Story of Self/Us/Can and should be used to engage your supporters and move them to action.

I’ll close with one more quote from Ganz:

“In these narratives, values are not abstract intellectual ideas but sources of the emotional energy that actually influence our choices and move us to act upon them. By linking stories of self, us, and now, public narrative communicates the moral authority of the speaker, brings the shared hurts and hopes of their constituency alive, and offers a hopeful, if challenging, opportunity to respond.”